We Had Our First Internal Maltego Developer Hackathon!


This year, we at Maltego hosted our very first internal developer hackathon for our Integration Development team across the world. Over the 2-day hackathon, there were almost 1,000 Transforms run, experimental Transforms for over a dozen data sources put into practice, four awards given out, more than 2 crates of caffeinated drinks downed, endless music tracks streamed, and dozens of boxes of pizzas and burgers eaten.

The hackathon served as an uninterrupted focus time and fun competition for our Integration Developers to tackle development challenges and experiment with bold ideas. The work and learnings are valuable for both future product development and personal upskilling.

Here’s a quick recap of how the hackathon went. 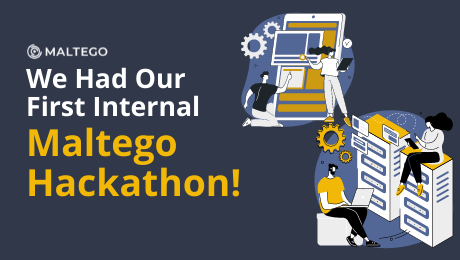 We Have Grown Collectively as the Tech Force in Maltego 🔗︎

Half of our Integration Development team, based in Munich, Germany, came together in the Munich headquarters while the other globally distributed half streamed in remotely. The team blocked two full days of focus time and worked in sessions with social breaks in between. For those who joined Maltego during the COVID-19 pandemic, it was the very first in-person interaction with their team members after months of working from home.

“I really enjoyed getting to know the team and have conversations in person, which wouldn’t have been as easy in an online setting.” The Project Manager of Data Integrations at Maltego said.

The developers could participate in the hackathon in teams or solo depending on their personal preference and compete with one another on various challenges and goals. Despite the competitive nature of a hackathon, we witnessed great sportsmanship where they shared difficulties and solutions openly and closely with one another. The central hackathon group chat was flooded with calls for help, ideas, suggestions, and hearts and smiley emojis around the clock.

“This is a great community effort and I see everyone jumping in to help solve one another’s problems. People are taking time out of their competitive efforts to support one another.” Our Engineering Manager reflected, to which one of our Integration Developers agreed, “There was no aggressive competition. Everyone was eager and open to share learnings and solutions to help remove roadblocks faced by others. The food was good. The beer was also good.”

One of our newest Integration Developers also said, “As the ‘new guy,’ I love the chemistry!”

With lots of frantic typing still going on, towards the end of the hackathon, we sat down for a collective retrospective and showcase session. Each participant documented their learnings and thoughts in the internal DevOps Wiki following the 4L principle—Liked, Lacked, Learned, Longed-for—and provided feedback on their development experiences. These insights helped the team comb through and openly discuss the challenges and ways to solve problems.

As our Russian developer concisely put it, “превозмочь (Overcome)!”

We Found Our Einstein, Sherlock, Picasso, and MacGyver 🔗︎

The Einstein Award went to the meticulous, scientifically minded developer who produced the best development learnings and knowledge during the hackathon. The winner spotted improvement potential of the current practices and implemented solutions that will benefit the whole team.

The Sherlock Award went to the developer with the sharpest detective nose. The winner wrote the most investigative integration that cyber defenders would love and threat actors would fear.

There is art in painting and, of course, art in coding. The Picasso Award recognized the creativity and out-of-box thinking of the winning developer, who presented the most interesting and unexpected use case.

In the intensity of a hackathon environment, one has got to both work hard and work smart. The MacGyver Award went to the developer with the best use of the development protocol. The winner was able to utilize the protocol and guidelines efficiently and effectively in advantage to their development.

What We Learned from The Hackathon 🔗︎

The hackathon has brought out creative ideas, practical results, as well as insightful learnings for the Maltego Integration Development team. The 2-day competition was an intensive stress test for our development server and our development manpower, and we have learned how we can effectively revive both. We spotted room of improvement in our development protocol and optimized it for future workflows.

We have also learned that we need to order more power drinks for events like this to keep everyone happy while they dealt with the frustrations of inevitable development trouble—code lines mysteriously disappearing, systems needing rebooting, not finding the right music playlists, and “unexpected exceptions”.

We are always looking for more Einsteins, Sherlocks, Picassos, and MacGyvers to join our Technology and Development team! If you are a passionate Java engineer, front-end engineer, or developers in other areas, check out our career opportunities and apply now!

Product Company News
Data at Your Fingertips: Which Data is Included in Your Maltego Plan?
Pick the right product and get started.
Choose your solution